MOST things governments do make almost no difference.

The daily rearranging of paperclips, awarding a new contract for supply of paperclips, or deciding to hold a paperclip amnesty so they can all be used again, doesn't change anything. Paperclips are still made and lost, and even in cutbacks there's a paperclip middle man making a profit.

Then there's bigger stuff they do like wars, which these days affect a thousand or so of our people and some tens or hundreds of thousands of theirs; or the NHS, which has been meddled with for years and while imperfect can be reversed about as easily as a speeding tank when the clutch has gone.

Education though - education is the biggie. One decision can affect millions of children and alter the entire course of their lives, with knock-on effects on where and how they live, what they earn, and how they die.

Education is the butterfly beating its wings to see what happens. Education deserves our attention, to be as good as it can be, to be relentlessly improved, and is far too important just to tinker with.

So of course tinkering is virtually all it's had. When I was young O-level exams were scrapped as unfair and unreasonable, reducing two years' study to two hours in an exam room at the height of summer where many - the dyslexic, those who fell ill, the ones not so good with stress, silence, heat, or pressure - had the entire course of their lives altered, often for the worse.

The Tories were running the country, and said it was wrong for children to have their opportunities ruined by the variables of just one day. They said it was wrong some students were not even entered for exams because teachers thought they would not pass and instead had to sit a simpler test that was dismissed as useless by colleges, universities and employers.

The Tories said it was fairer for all pupils to sit one exam. Everyone would be graded so you could tell who was best, worst and mediocre. To make it a true assessment, work you did during the previous two years would count towards your mark.

So I sat GCSE exams at 16. Some I had no choice about - ugh, maths - and just as well, otherwise I'd never have endured the lessons or understand long division. Others I got to pick, like doing French rather than German (on the basis it sounded like someone being sick).

Some were all about the exams because working out algebraic equations is best tested, let's face it, with a pen and a piece of paper. Others had modules like doing a specific project in combined science showing I could design, hypothesise, investigate and prove something over a period of weeks. In art you had to produce, well, art, and that took a term not two hours in a sweaty room.

Different subjects put more or less weight on the tests or the modules, and it all seemed perfectly rigorous to me.

I disrupted lessons more often than I listened to them, and some teachers loathed me. Most were pretty tolerant but there were one or two who, under the previous system, might have said I'd never pass the O-level and should sit the easier test as someone who couldn't be bothered to leave the scrapheap.

Some subjects I found easy and others were a headache. History was a breeze, geography a swizz, physics made me want to cry and media studies was simply the most boring pile of crud ever devised by man.

I got three As and six Bs, largely because I coped better with exams than I did lessons. I went on to do A-levels, upsetting teachers as I went, and after getting three As upset them some more by refusing point-blank to go to university and getting a job on my local paper.

Then the Tories were replaced by Labour, and every year I reported the pass rates had gone up. The Tories said it was a swindle, and Labour said children were doing better. Schools were encouraged to compete over pass-rates, so they got their exam services from bodies which awarded higher marks. You could resit bits to bump your grade up. Quangos were set up to oversee this new 'market', then changed, then closed down. Everyone had to go to university, and no-one learned to be a tradesman.

Now the Tories are back in, Education Secretary Michael Gove has decided it's GCSEs which are unfair and unreasonable so we're going to get O-levels again because he did them and after 24 years of ceasing to exist they are much nicer.

At one point Gove even wanted to bring back the second tier test for less-able pupils, so that children could have their entire futures decided by a teacher they've spent the past term flicking rubber bands at. It was only Nick Clegg who stopped him, which should prove just how bad the idea was.

It's a policy that's been announced in bits, via leaks, so the full details aren't known beyond the fact that after 2015 it's back to three-hour exams, no modules, no practical tests of your scientific knowledge or artistic ability, and grades A to F will be replaced with numbers 1 to 6.

The benefit of modular exams is pupils are encouraged to go away and properly think about things rather than just vomit up received truths like parrots with pens, which is why I feel like setting the Education Secretary a little test of my own:

* Explain how 'Gove levels' are less unfair or unreasonable than they were in 1988. Use diagrams and a spare piece of blank paper if necessary.

* Half of all GCSEs today include modules. What percentage of GCSEs therefore do not?

* If seven per cent of GCSE students get the top grade of A*, and under the new proposals the top 1 grade will be given to five per cent of pupils, what proportion of Britain is any less 'dumbed down' than it was?

* If a group of headteachers say the exam industry and incompetent regulation is to blame for grade inflation, should the Education Secretary a) blame the Tories who came up with the idea b) ban some students from the chance of higher attainment c) shut down regulators d) all three?


The fact is this latest 'shake-up' of the exam system has not been tested, trialled, checked, or backed by anyone whose life is going to depend upon it. It's been devised by a man whose idea of maths is to add up the cost of all the furniture in his house and subtract it from the taxpayer, and it is different from time travel only in that it is the first thing on Earth to be improved by Nick Clegg.

By all means, put more algebra in maths exams. Get rid of multiple choice unless it's the kind of question Stephen Hawking would hesitate over. And no-one will weep if media studies is wiped from existence.

But set a national standard for exam boards. Make the regulators do their job. Don't let schools buy in softer exams to get better grades. Have a line, and don't let anyone cross it.

Why should someone like me - who enjoys an essay and puts in the revision when I need to - be given more chances in life than someone like my friend who came down with ME and even with resits had to rely on her coursework to scrape her way into uni? And what about the dyslexic, the rebellious, the stoned, the lazy? They might all do better than me in life, given the chance.

And education is about giving children a chance. Letting the butterfly flap, without ill effect, until it's ready to fly by itself.

It's not about judging every student by the standards our politicians were judged by at their school when they grew up. It's not supposed to be giving us children rated according to how like Michael Gove they are.

Give us butterflies instead. 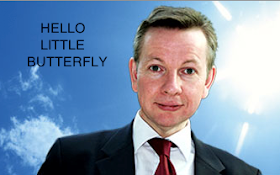 It takes someone special to squish them.